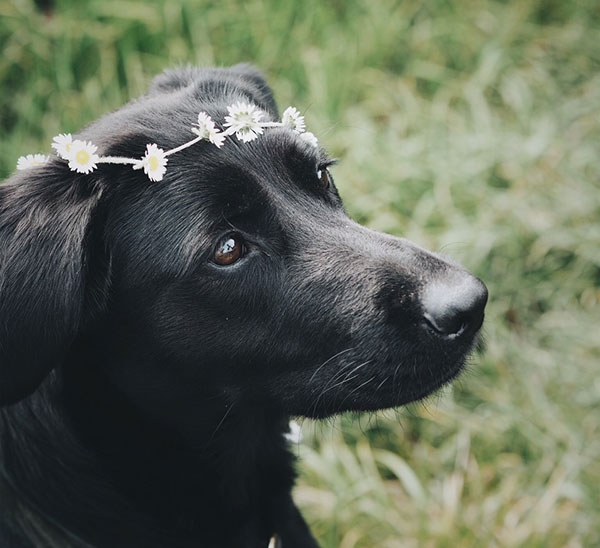 Adopting Luna really begins several years earlier with my Gramps adopting Tilly, a chocolate Labrador who had been rescued from a puppy farm.

As she aged, she needed more trips to the vets (and groomers) and the team at St Giles took care of both. A few times I had the chance to take out another pup for a walk whilst I waited for Tilly to be primped and preened. I’ll admit I did fall rather in love with little Halo, who I hear is doing well in her new home!

Anyway, fast forward and Jim, my husband, begins to soften to the idea of another dog. We already had Bracken, a black lab, from a puppy. Jim had never owned a dog before, so this seemed like the best route at the time for a new pupdad! Bracken is 6 now and has been an old man since he was about 3. He is terribly grown up and we weren’t quite sure how the only child would feel with a new pal.

One day whilst at the vets with Tilly, I asked the rescue team if they’d let me know if any Labradors came in. Just a casual enquiry. I have a massive soft spot for them and because they’re pretty easy going, they don’t often come up for rehoming, or so I hear. After we finished in the vets, they asked if I could pop back down to the rehoming centre for a chat. As it turns out, a young black Labrador cross, (then called) Ayla was in their care.

Jim and I met Ayla a few days later. I’ll never forget her bounding into the play area, so happy to be free and out and about! She came to us confidently and was friendly from the word go.

We took her for a walk, with Bracken too – they didn’t seem to even be bothered about each other’s presence, a good start. About thirty seconds into the walk, I knew that she had to be part of our family. Her funny little trot, the way she avoided puddles, her funny ear that flipped back on itself.

She wasn’t happy in kennels, as some dogs aren’t, despite the wonderful care she was receiving. She had formed a bond with Grace! She was very skinny and healing from her spaying and some skin problems on her ear and legs that the team at the vets had treated. In the photos from our first walk together, her head looks too big for her body!

From here, we decided it was best to foster her for two weeks, purely because we also have a parrot and if she was a chaser, it wasn’t going to work.

Just after Christmas we picked her up, strapped her into the backseat and went home, already calling her Luna instead of Ayla. (I wasn’t really going to give her up, even then!)
We walked them both in the fields before going inside and she tiptoed around every puddle, looking confused at the mud, smells of cow and the rhynes we live by.

Ruby, the bad-tempered parrot, gave her a nip on the nose at their first meeting and Luna has avoided her ever since – which may seem unkind but it does allow a kind of harmony to reside in the house.

Bracken as it turns out, switches between adoration for a playmate, tolerance, and disinterest. Whilst on a ‘walk’ they tear around each other like a whirlwind, chasing each other and nipping at their tails. Everything Bracken sniffs, Luna has to sniff too. Every morning, they have a funny five, speeding around the kitchen before settling down to wait for their crusts from my toast. Luna encourages playtime by pulling him along the floor by his collar, but at other, more sleepy times, Bracken will contentedly let Luna lie snuggled close, sometimes with her head on his back. They have only ever fallen out over a piece of broccoli that fell to the floor. All I can say is dogs are really, really weird sometimes.

We have now been living with, and loving Luna for just over a year. It’s flown by and we honestly couldn’t imagine life without her. She’s the perfect fit for our little family. She no longer tiptoes around puddles and whilst she doesn’t like to swim, she LOVES to run through the floods, streams and puddles, splashing the water around. She’s a keen roller, with eau de badger being her preferred scent.

Her little ears still flick themselves back when she’s enjoying herself, which we call ‘ear weird,’ and she’s put on a fair few kilos – she’s all muscles and strength now! Of an evening, you’ll find us both on the floor in front of the fire, hers and my favourite spot.

Her personality is what makes everyone love her. Luna-tic, Luna Lu, Lulu, Loopy Lu, ‘Little’ to Brackens ‘Large,’ everyone has a nickname for her. Her big eyes make everyone say, “Oh Luna!” before she proceeds to give very wet and mostly unwanted, poorly scented kisses. She’s fallen into her role of Bramble & Wild shop dog with ease, loving the attention from passers-by and children who want to pat her silky head.

She’s no saint though, oh no. The love of her life? Bread. She’ll perform acrobats to reach onto the kitchen worktop and snaffle a freshly baked sourdough. She really is a girl after my own heart!

Opening Times
Morning: 10am till 12pm
Afternoon: 2pm till 4pm
We are closed  on Wednesdays